Real Estate Investing Platform, Trelly, Launches In Tennessee to Help Investors Win In One of the Most Competitive Markets in the US

NASHVILLE, TENNESSEE–NOVEMBER 18, 2021–Following the launch of Trelly® over 7,000 investors excitedly joined the free real estate investing platform, which enables them to buy and sell off-market residential investment properties directly from their phones, tablets, and computers.

Now, the company is expanding into Tennessee to help local investors scale their businesses by streamlining the acquisition and disposition process.

We're looking forward to our partnership with Trelly, we believe that it’s going to bring a lot of value to our investor community and help a lot of people. 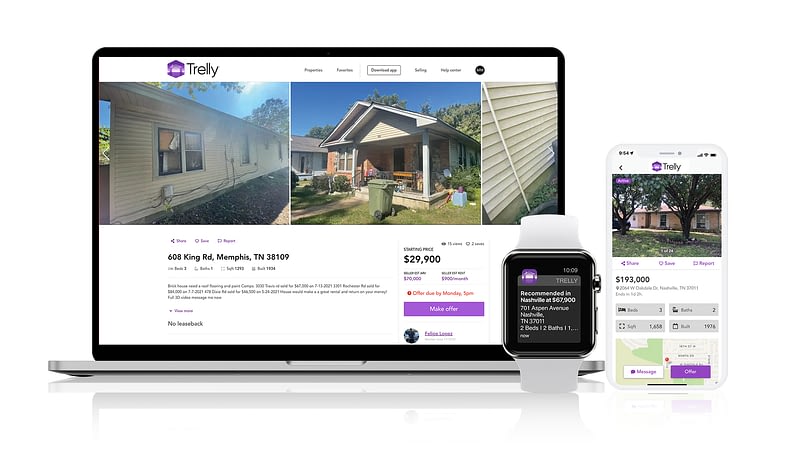 Doug Betty, Founder & Director of Tennessee Real Estate Investors Association, says, “We’re looking forward to our partnership with Trelly, we believe that it’s going to bring a lot of value to our investor community and help a lot of people.”

For Trelly’s founder, Josh DeShong, the decision to expand into Tennessee was an obvious one.

“There’s tremendous opportunity to serve the real estate investing community in Tennessee, particularly Nashville because home prices have appreciated over 18% in the last year and the city faces the 3rd most competitive bidding war in the entire nation. This is great as a homeowner, but it makes things more difficult and costly for real estate investors. So I wanted to bring Trelly to investors here in Tennessee to help them run their businesses more efficiently and profitably,” he explains.

This is important because of the vital role investors play in a community.

DeShong says, “Tennessee is truly an amazing state — it has a rich history and culture, and its capital, Nashville, is the epicenter of the music industry. By helping local real estate investors become more efficient and profitable, we help them preserve what’s already great about the city, revitalize what needs improvement, and create countless new opportunities for other local businesses.”

Trelly’s new features, along with a rapidly growing number of users and listings, will help investors to scale their real estate investing businesses larger and more quickly.

This is essential because increased investor activity—especially from institutional investors like Blackstone and other multinational giants—is making it more difficult to acquire the properties investors need to scale their business and remain profitable.

We are super excited to have Trelly come to Tennessee and be able to have another tool under our belts to sell our properties quickly and efficiently.

“We are super excited to have Trelly come to Tennessee and be able to have another tool under our belts to sell our properties quickly and efficiently,” said Amanda Dean with Real House Deals.

At its core, Trelly works like a B2B version of the MLS — a marketplace where sellers can list off-market properties for other investors to buy. These properties are exclusive to Trelly and cannot be found on the MLS — or anywhere else.

This free platform provides a more efficient and less costly channel for acquisition and disposition because the platform has a user base of active investors looking to buy and sell, and no Realtors are involved in the transaction.

Trelly can be accessed via the web at trelly.com, or through the Trelly app available on the iOS and Google Play app stores.

Trelly is the culmination of 15 years of innovative real estate development by CEO Josh DeShong, and was developed as a platform to help investors scale their businesses more effectively.

Over his career, DeShong has closed nearly $2 billion in real estate transactions. Josh is one of the top 50 real estate agents in the country and has received more than 100 production and volume awards.

The platform was developed under the guidance of Trelly’s CTO, Stephen Chiang. Prior to joining the team, Chiang served as a project manager at Microsoft and as a software engineer at Google, and he is also an active real estate investor himself.

Since the platform’s beta launch in just three test markets, Trelly has conducted more than well over 700 transactions with real estate investors for a total GMV of over $170MM. This proves there is a considerable demand for the service among investors.

DeShong says, “I’m excited about the impact Trelly will have for real estate investors who want to scale their businesses, but I’m even more excited about the ripple effect that will create in the economy as a whole for so many other people. The positive impact of the latter is incalculable.”